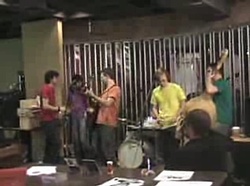 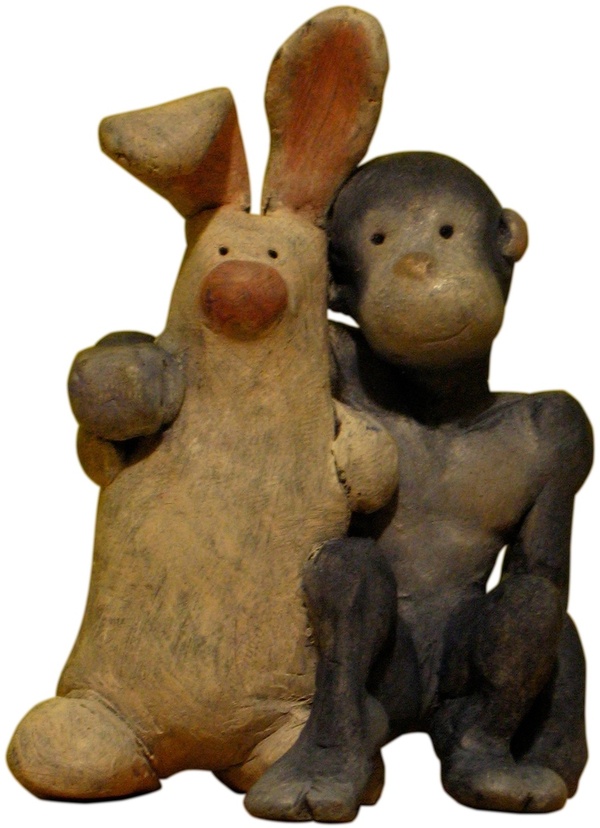 Made of Sculpey, and painted with oils.

Back in the day (when I was young; I'm not a kid anymore, but somedays I kinda wish I were a kid again), I tried to be an artist. This is a collection of some of the stuff I did before all this engineering stuff.

Most of this work was done during my sophomore year (2000-2001) of college at Birmingham-Southern College (before I transferred to Columbia University to do engineering, 2002-2004). I made a good bit of art during my junior year at BSC, but unfortunately I don't have any pictures of them. Many of these pieces now reside with friends and family, while others are forever lost. So it goes... Some short descriptions accompany the images. Feel free to skip over the meaningless drivel.

This is the only sculpture that I have pictures of. I started this piece in the Spring semester of my freshman year during my first art class at Birmingham-Southern (the assignment was to make an approximately life-size dog sculpture). But I did most of the work for this during the Spring semester of my sophomore year---just in time for the annual juried student exhibition.

The dog transitions from a rusty iron base, to its metal skeleton, to its chicken-wire frame, to drippy plaster, to drippy paint, and finally, the fully formed head at the top. Basically, its about growth and rising from difficult circumstances. The fact that it's a dog has nothing to do with the meaning of the piece (it was an assignment; she was based on my dog, though).

I gave this piece to my friend Wes when I left Birmingham.

I took a figure drawing class at the University of Alabama at Birmingham between my freshman and sophomore years at BSC. For one of the homework assignments we took pictures of one another hiding from a camera (and a really bright flood light, hence the intense shadows) and picked a few to draw.

The drawing on the left is of Professor Hiam, who taught the figure drawing class. I'm the person hiding in center and on the right is my friend Bo. My friend Mike has the two drawings on the left (or at least I hope he does). 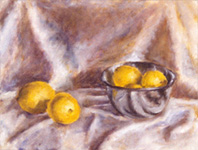 These are just some academic studies. On the left, a still life with a metal bowl, drapery, and some lemons. On the right, some hands and feet. The painting was done in painting class with Professor Cole at BSC and the drawing of hands and feet were done as a homework assignment for the UAB figure drawing class. 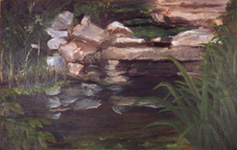 I generally don't like landscapes. If I saw this painting in a gallery, I would probably ignore it. But I really enjoyed painting this, so I put it up to remind me of good times. I painted this during an overcast afternoon at the Birmingham Botanical Gardens.

My project was dubbed "Golden Years". I went around and took photos of elderly people and drew pictures of them. I would have had them sit for a portrait, but I wasn't sure if they'd be able to sit still for 30 minutes to an hour. Most of the people I met were at retirement homes, but the one on the left was a guy I happened to notice at Lynn Park in Birmingham. For this drawing, I used paint sticks, which are pretty much oil paints in stick form; don't confuse these with oil pastels. I think my friend Bo has this hanging in his dad's shop.

The other two drawings are of people at retirement homes. I like the guy in the center a lot; He exudes an air of calm and wisdom. The lady on the right seems like she'd invite you into her home and bake you fresh cookies if you dropped by on her.

So what can I say? I have a bellybutton fetish.

Actually, I drew the picture on the left for my figure drawing class; I can't remember what the assignment was. And then for my painting class we were supposed to copy the style of an artist of our choosing (Pollack). I couldn't come up with a subject for the painting so I just copied the drawing, more or less. The drawing on the left was done with soft pastels and the painting on the right was "painted" with latex house paint.

Here are some figure drawings I made during my class at UAB. The class met once a week for about 4 hours and we had a female model one week, and then a male model the next week. During one of the sessions, a male model was posing and he, um,...got aroused; he never came back. Sorry I don't have any drawings of the male models posted; naked men just look awkward. 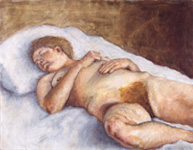 Finally, here's a nude I painted in my painting class at BSC. Just for the record, we chose our easel positions before the model was present, so I had no choice on my viewing angle.

This is just a collection of work I did during my sophomore year. The only reason I have pictures of this stuff is because I made slides of them in order to enter art competitions. During my junior year, my focus was more on theme than aesthetics and realism. Unfortunately, I don't have pictures of any of it because, after my junior year, I left the world of art to pursue engineering at Columbia University. Someday, I will be able to add more art to this website. Someday...