Once upon a time, I was an experimental and analytical researcher in fluid mechanics. This is what's left of that chapter. (Heavy, right?) 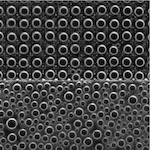 Fog capture is desirable as a water resource in remote areas that receive a large amount of fog, such as the Namib desert and the mountains of Peru. In addition, fog removal can improve visibility around roadways and airports---thus, reducing traffic accidents and delays. On smaller scales, fog can ruin the favorable wetting properties of hydrophobic, micro-textured substrates.

For this project, I constructed a wind tunnel for imaging flows with micron-sized droplets suspended in air (i.e. fog). In order to characterize the flow and measure the accumulation of water on flat and micro-textured substrates, I implemented particle-tracking and circle-finding algorithms in Python.

For my Ph.D., I constructed an experiment to measure the growth rates of single-crystal needles of tris(8-hydroxyquinoline) aluminum---i.e. Alq, an organic semiconductor commonly used in organic LEDs---during annealing in methanol-vapor. I modeled this system as a thin, liquid film composed of a mixture of Alq & methanol and driven by intermolecular forces, surface-tension, & diffusion. Simulations based on this model compared favorably with experimental measurements. See my PhD thesis for details.

We investigate a simple experiment, where a long, thin sheet, i.e. "flag" (black in image) is clamped to a jet-nozzle (green in image). The jet wets and flows along one side of the flag from base (clamped end) to tip, which hangs freely. At low flow rates numbers, we observed stable, static flag shapes with wavelengths inversely proportional to the flow rate. The static shapes are well described by a simple model (blue in image) coupling linear beam bending and inviscid flow. At higher flow rates, static shapes become unstable, leading to periodic oscillations analogous to previous work on hanging cantilever tubes conveying fluid (Paidoussis, 1970; Doare and Langre, 2002). The observed critical flow rates for instability agree well with those predicted by linear stability analysis.

Transition from drag to thrust in a flapping foil

Most objects in fast-moving flow shed vortices of alternating sign, this is known as a Bernard-von Karmann vortex street. For flapping objects (e.g. wings or fish tails) that generate thrust, we observe a similar wake, but with opposite rotation. I built a soap film tunnel and attempted to visualize the transition between these two cases; unfortunately, my experimental setup didn't allow me to observe the later phenomenon. Here's my final presentation from the class, but it's pretty incomprehensible because it's just a series of pictures with almost no text.

For my master's degree, I built a mechanical swimmer, which used a passive, elastic tail to generate propulsion in low Reynolds number environments. Here's a link to my quals presentation and my master's thesis; both of which talk about my swimmer: