Convolution is one of the fundamental concepts of image processing (and more generally, signal processing). For the scikit-image tutorial at Scipy 2014, I created an IPython widget to help visualize convolution. This post explains that widget in more detail.

Only a small portion of this post is actually about using the widget API. IPython notebook widgets have a really easy-to-use API, so only a small bit of code is necessary. That said, this is a really nice demo of both image convolution and the usefulness of IPython widgets.

Before we get started, let's define a bit of boilerplate that's useful for any IPython notebook dealing with images:

I highly recommend setting the default colormap to 'gray' for images and pretty much everything else. (There are, however, exceptions, as you'll see below.) Also, using nearest neighbor interpolation (which is what 'none' does for zoomed-in images) makes pixel boundaries clearer.

The basic idea of image convolution is that you take an image like this: 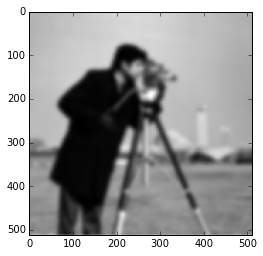 ... and filter the image using a convolution "kernel" that looks like this: 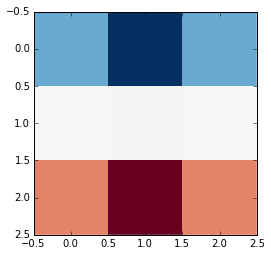 ... to arrive at a result that looks like this: 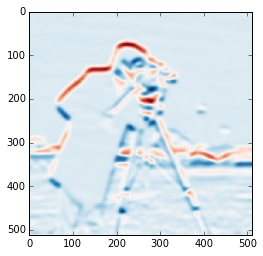 As the variable names suggest, this filter highlights the horizontal edges of an image. We'll see what's happening here later on.

(Note that the coloring in the kernel and the filtered image come from the colormap that's used. The output is still a grayscale image: The red just means that a value is negative, and the blue is positive.)

We're going to develop an IPython widget that looks something like this: 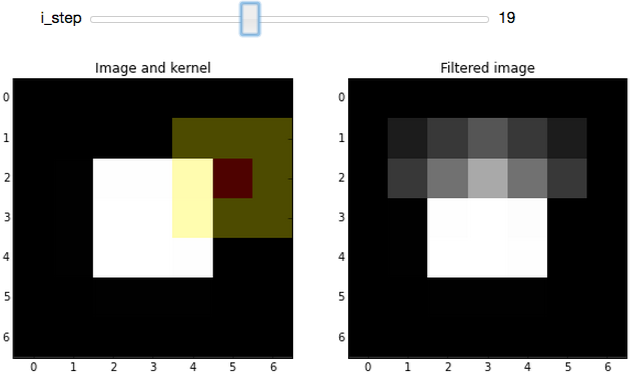 The slider in the widget allows you to step through the convolution process for each pixel in an image. The image (a white square with a black background) used for the demo is really boring to make the filtering process clearer.

The plot on the left shows the original, unfiltered, image. On top of that, we overlay the kernel position: The center pixel of the kernel is tinted red, and the remaining pixels in the kernel are tinted yellow. The red pixel is the one being replaced by the current step of the convolution procedure, while red and yellow pixels are used to determine the replacement value.

On the right, we see the image at the ith step of the convolution process, which gives the (partially) filtered result.

Before we get started though, let's define some helper functions.

Helper functions are great: They make code much more readable and reusable, which is what we should all be striving for. It's not necessary to understand these functions right away. You can easily skip over this for now, and revisit it if you have questions about the actual widget implementation. The function names, themselves, should be enough to describe their... ahem... functionality (except for iter_kernel_labels, that one's tough to describe succinctly).

Iterate over pixels with iter_pixels

First of all, we're going to want to look at the individual pixels of an image. So, let's define an iterator (or actually a generator) to make that easy:

This "yields" the row, column, and pixel value for each iteration of a loop. By the way: You wouldn't normally loop over pixels (since Python loops are a bit slow) but the whole point of this widget is to go step-by-step.

Like I said, I like small utility functions, so I pulled out the code to plot side-by-side images into its own function:

What's the hardest part of any math problem (discrete, or otherwise)?

There are many different solutions to dealing with boundaries; what we're going to do is just pad the input image with zeros based on the size of the kernel.

First we define, a utility function to figure out how much padding to add based on the kernel shape. Basically, this just calculates the number of pixels that extend beyond the center pixel:

Padding an image border with add_padding

Then we define another utility function that uses the above function to pad the border of an image with zeros:

And sometimes, we need to take the padded image (or more likely, a filtered version of the padded image), and trim away the padded region, so we define a function to remove padding based on the kernel shape:

Just to make those functions a bit clearer, let's run through a demo. If you have an image that has a shape like:

... adding padding to the image gives:

Note that the total amount of padding is actually one less than the kernel size since you only need to add padding for neighbors of the center pixel, but not the center pixel, itself. (If this isn't clear, hopefully it will become clear when we start visualizing.)

And of course, using remove_padding gives us the original shape:

Slicing into the image with window_slice

We're going to iterate over the pixels of an image and apply the convolution kernel in the 2D neighborhood (i.e. "window") of each pixel. To that end, it really helps to have an easy way to slice into an image based on the center of the kernel and the kernel shape, so here's a pretty simple way of doing that:

The center parameter is just the (row, column) index corresponding to the center of the image patch where we'll be applying the convolution kernel.

As a quick example, take a 2D array that looks like:

The values in this array are carefully chosen: The first and second digit match the row and column index.

We can use window_slice to slice-out a 3x3 window of our array as follows:

Note that the center pixel is 11, which corresponds to row 1, column 1 of the original array. We can increment the column to shift to the right:

Or increment the row to shift down:

Non-square kernels would work too:

Applying the kernel to an image patch with apply_kernel

Labeling the kernel position with iter_kernel_labels

The whole point of this widget is to visualize how convolution works, so we need a way to display where the convolution kernel is located at any given iteration. To that end, we do a bit of array manipulation to mark:

Visualizing our kernel overlay with visualize_kernel

Now we want to take those 1s and 2s marking our kernel, and turn that into a color overlay. We do that using a little utility from scikit-image that overlays label values onto an image:

So all of the above helper functions were just to get us to this point: Making our own IPython widget.

But before that (such a tease), here's a really basic example of IPython widgets, in case the concept is completely new to you.

To define your own IPython widget, all you need to do is pass a function and the argument(s) you want to control to widgets.interact. So a very simple example would just be:

If you run this code in an IPython notebook, you should see a slider and i = 5 printed by default. Moving the slider changes the value printed by printer. The keyword argument, i, must match the argument name in printer; that's how slider value gets connected to the printer function.

A stepper function for image convolution

For the real widget, we're going to combine all of the helper functions defined above. Unfortunately, there are a couple of things here that make the code a bit more complicated than I would like:

Now we just initialize the stepper function and pass that to widgets.interact:

There's a bit of tweaking here just to get the slider widget to start off at zero, but that's not crucial. You could have used

but that would start with the slider at the midpoint, which isn't ideal for this particular demo.

Up until this point, the code written here would work perfectly well in a normal python script. To actually use the widget, however, we need to execute the following lines in an IPython notebook (Download Notebook).

Before using this widget, let's define a really small image, which makes this demo easier to understand: 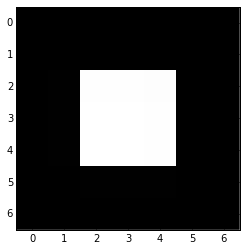 One of the classic smoothing filters is the mean filter. As you might expect, it calculates the mean under the kernel. The kernel itself is just the weights used for the mean. For 3x3 kernel, this looks like:

These weights will then be multiplied by pixel intensities using apply_kernel.

Using our convolution widget, we can see how the mean-filtering process looks, step-by-step:

which would create the following widget in an IPython notebook: 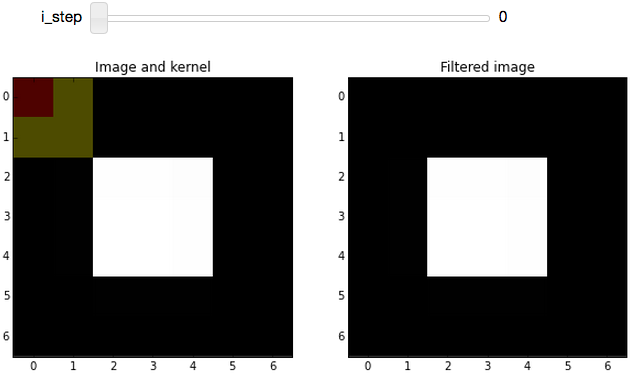 This sets up the widget at the first step of the convolution process. (As with most arrays/matrices, we'll start counting at the top-left corner). The filtered image (on the right) is unchanged because the kernel is centered on a very boring region (all zeros; including the out-of-bounds values, which are padded with zeros).

Boundary conditions, revisited: If you look at i_step = 0, you can see why we went through the trouble of defining all that image-padding code: If we want to apply the convolution kernel to the top-left pixel, it has no neighbors above it or to the left. Adding padding (which was removed for display) allows us to handle those cases without too much trouble.

As you increment i_step, you should see how the filtered image changes as non-zero pixels fall under the kernel: 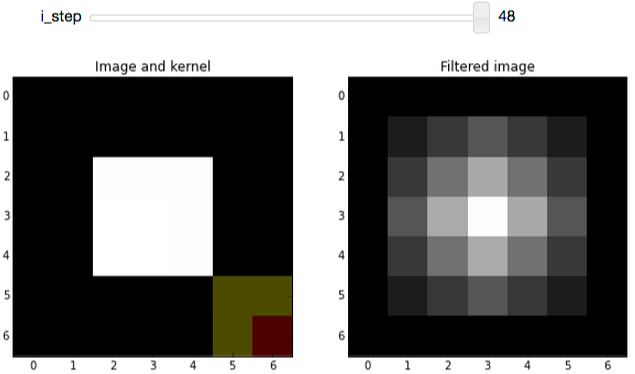 After playing around with the widget, you should notice that the mean kernel is really simple:

In the filtered result, hard edges are smoothed: Since a pixel on an edge will be bordering both white and black pixels, the filtered result will be gray. This smoothing effect can be useful for blurring an image or removing noise (although edge-preserving denoising filters are probably preferable).

Finally, let's look at another really useful and easy-to-understand filter: The edge filter. For images, edges are basically boundaries between light and dark values. An easy way to calculate that is to take the difference of neighboring values.

Here, we'll use the Sobel kernel for detecting horizontal edges (which was defined at the very beginning):

Basically, using this kernel to calculate a weighted sum will subtract neighboring values below the center pixel from those above the center. If pixels above and below the center are the same, the filtered result is 0, but if they are very different, we get a strong "edge" response.

Again, using our convolution widget, we can step through the process quite easily: 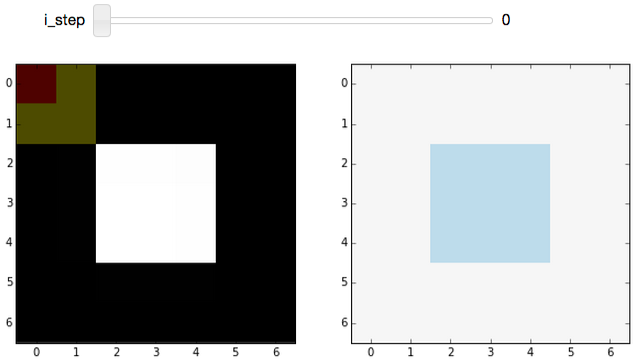 Again, we start off at a very boring region of the image, where all pixels under the kernel are zero. Incrementing the step shows the edge-filter at work: 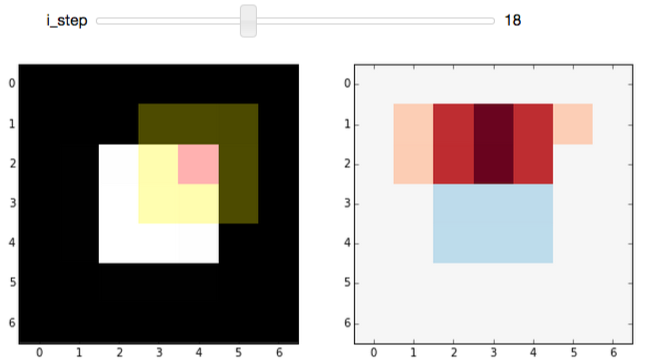 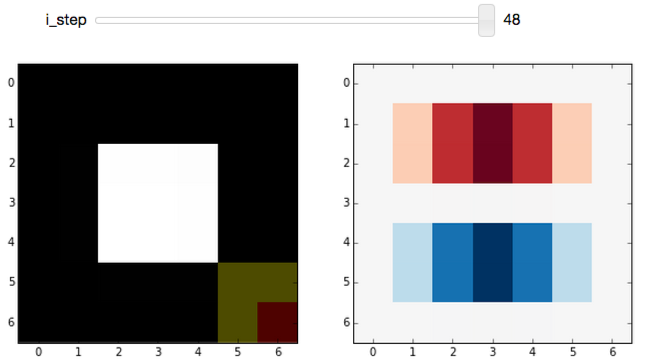 Play around with the widget a bit. You should notice that:

Often, you don't really care about the orientation or direction of the edge. In that case, you would just combine the horizontal-edge filter with the corresponding vertical-edge filter and calculate the gradient magnitude. This is exactly what the standard Sobel filter does.

I hope that clarifies the idea of convolution filters.