Fluid mechanics lends itself to some beautiful visualizations and images. I won't cover anything too complicated here, just potential flow, which any undergrad who has taken a fluid mechanics course should be (at least somewhat) familiar with.

I won't really cover the math or theory here; I'm just going to plot some pretty pictures. Let's just assume you already have some stream functions close at hand. For example, here's the stream function, $\psi$, for the flow around a cylinder:

Here, $U$ is the (horizontal) flow velocity, $R$ is the radius of the cylinder, and $r$ and $\theta$ are polar coordinates. Let's rewrite this equation as a python function that returns a sympy function (since we're going to want some derivatives later):

This function returns a sympy function object that takes variables $x$ and $y$ (instead of $r$ and $\theta$), which are convenient for plotting later. (If you're not familiar with sympy functions, check out some tutorials.)

Now, we have functions u(x, y) and v(x, y), which can accept numpy arrays. Before showing some pretty plots, let's create a couple of convenience functions. First, here's a simple function that creates a grid of points, X and Y, and plots streamlines using matplotlib's brand-spanking-new streamplot function (as of this writing, you'll need a recent github version of matplotlib):

which accepts a matplotlib axes and our velocity components, $u$ and $v$. Here, np.ogrid just creates a 100-by-100 grid of points between the specified $x$ and $y$ limits. Note that the indices to np.ogrid look like start:stop:step, but the "step" here is imaginary. Using imaginary numbers tells numpy to interpret the last value as the "number of points between start and stop" instead of "step interval" (kind of like switching from np.arange to np.linspace).

Next, to prettify our plots a bit, let's create a function that removes extra white-space, ticks, and spines (the lines surrounding the axes):

Now with that out of the way, let's plot the flow around a cylinder:

Stepping through block-by-block: we first create the stream function (using the default velocity and cylinder radius) and create velocity functions $u$ and $v$. Next, we tweak the default sizes (of both the data-limits and the figure) and call our convenience function, plot_streamlines. For better visualization, we also plot a circle, which represents the cylinder. Finally, we call our convenience function format_axes to clean up the plot. And here's the result: 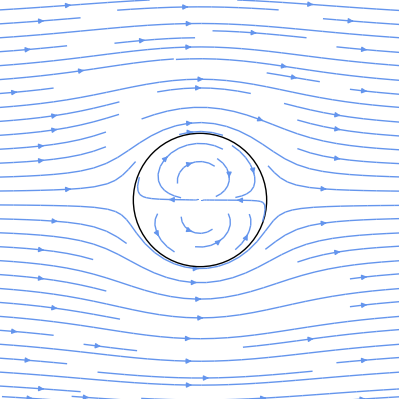 That's all there is to it. If you have your equations written in terms of potential functions instead of stream functions, then you can just switch out the derivatives in the plot_streamlines function and you're good to go.

Since we spent so much time writing a framework for plotting stream functions, we might as well play around with it a bit more. Luckily, there's a stream function that describes flow around a range of geometries (e.g., corners and walls):

Now, let's start simple with a vertical flow impinging on a horizontal wall (n = 2), or, equivalently, flow around a 90-degree corner: 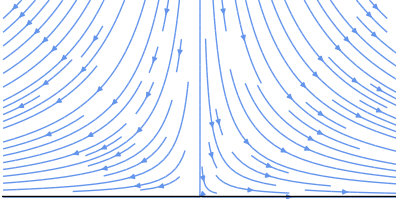 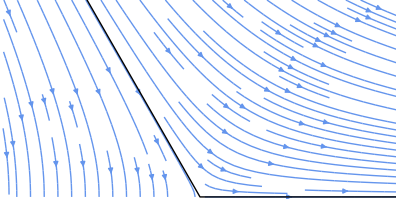 Finally, when n is negative, we can simulate singularities. Here's a quadrupole (n = -2): 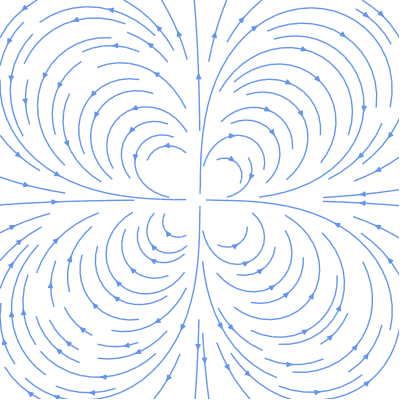